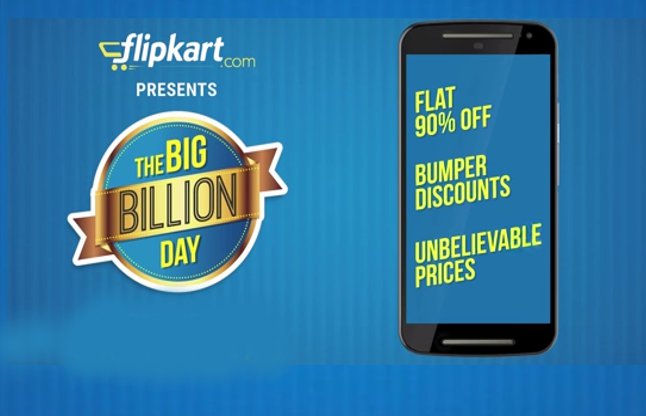 The necessity to run it’s business model without or with limited marketing investment saw Flipkart opting for a digital strategy for its couple of recent sale events. The latest sale, Big 10 Sale, a five day sale was witness to Flipkart abstaining from any mode of advertisement whether it was TV or outdoor media. It totally gambled on the digital push to bring customers towards itself.
Strategy Increases The Number Of App Installation

This methodology saw in increase in the number of app based users and app installation increased to 65% when compared to last year’s sale, sources from the company revealed. The mobile version of the website became an important source or sale and the company targeted it’s audience in tier II and III markets having low end phones. They also implemented browser based push notification to rope in more customers.

Flipkart Focuses On Digital Marketing Rather Than Radical

Kalyan Krishnamurthy, CEO at Flipkart, advised the group about the deal and said there would be no “radical marketing spends.”
Ram Papatla who is the vice-president of product management segment at Flipkart said that, “This gave us five months to plan on a digital strategy during the sale”.

Strategy Of Gaming and Contest Amid Sale
The marketing strategy also saw introduction of games and contests for bidding the lowest price of products. The strategy pulled in almost 2 million users with users participating almost 3 times a day.

The play-and-win amusements likewise observed investment from 1.5 million clients who shopped over various classes amid the sale.

Papatla said that, “The average order value from these playing users was 1.8 times that of the non-playing users”.

Significant Amount Of Players Do Shopping

As per a data of the company, almost 60% of the individuals who played the games did shopping amid the sale.

Alibaba, Chinese e-commerce mammoth, has owned the techniques of games and contest since two years in order to promote the annual singles’ day sale on 11th November.

Senior director of user experience, product and growth at Flipkart, #Arindam Mukharjee said that, “We also updated to an agile notification system to avoid customer disappointment when the inventory gets over. The notifications were sent out ahead of time and it also informs the customer about the inventory remaining”.

He said that company took interest in serving the enhanced experience to its customers and that’s why it reduces the image load time of the app by 30%.

Mobile Users Are Important
Flipkart reported that almost 23% of the search was done on the mobile browser which is more that that done during the month of April (20%). This report was published for customers accessing the site using 2G network.

Television Ads Strategy Now And Then

It has experienced that Flipkart radically trimmed the marketing ads on channels like television as well as print media in past few years. As per a data, total investment by the ecommerce companies in India over television ads amid of festive sale in 2016 of October-December was Rs 175-200 crore, driven by Amazon, Snapdeal, and trailed by Flipkart.