You have already heard about the Mobile First Index experiment of Google according to which mobile version of a site will be the primary source for ranking and it is to release soon. Though the date is not fixed for the launch, Google has announced that it will not launch it on a specific day in fact it is planning to launch it in tranches. Here are some more interesting fact you should know about Mobile First Index before its launch.

Mobile First Index will not be launch till 2018

At the starting of this year on Jan, Gary Illyes said at SMX advanced that Mobile First Index is not going to be launched till 2018, as they are concentrating on “Quality Neutral” which is not easy to achieve.

John Mueller also confirmed that it would be possible that this will launch in batches.

Google mobile first index is many quarters away from launch #smx

As per Illyes, they are waiting for a “quality neutral” launch. It means they don’t want to make a drastic change in search result and are looking to make it same or hoping to make it better.

So they won’t launch it until they get a “quality neutral” data set.

He also said that it is too hard to get this result because they are working for a complete new web and mobile web along with new index. So it will take time.

As per a tweet made by the John Mueller on 20th June, there is no any specific date for launching of Mobile First Index and they are planning to shift the sites as they will find they are ready.

Mobile First Index will be released in Tranches

Google announced that instead of launching Mobile First Indexing on a specific one day it will launch it in batches.

John said that, “possible that we’ll say well this batch of sites works perfectly fine on mobile first indexing so we’ll just switch that over”. 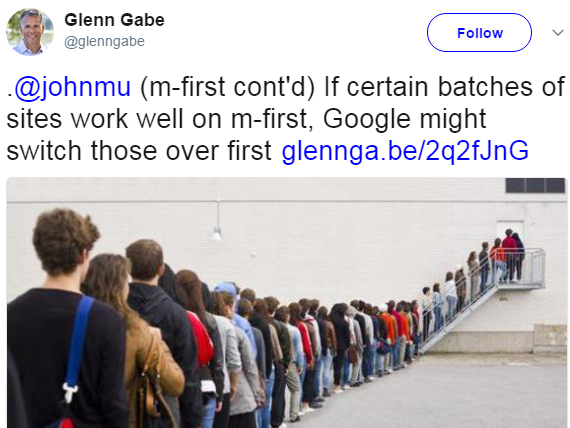 It would be possible that they will figure out an algorithm to detect which sites become ready to switch over Mobile First Index and they will do so.

Additionally, John said that it is still in work.

John also said that if you are planning to move from M dot (i.e. http://m.domain.com) to responsive mobile friendly website, then the best time to do it is prior to launching of Mobile First Index. This statement was made on the fact that it would be easier to do it now before then it would be complicated and takes more times as well.

Now Google is indexing your desktop site so moving to M dot is not much to do with the current index as your M dot is not completely indexed. But at once it gets indexed it will take several months to process.

Moving of URL would take several months instead weeks

While moving of a site, you own a brand new domain name and you want to rebrand to it. It takes almost 3 months or more to pick up all changes by Google. Gary Illyes said that though Google said it should two weeks but practically it can take a little more time.  Since it needs to change domain name, file name, and URL, so takes longer time.

Additionally, he said that for small sites it would take two weeks but for large sites it is not even take close to this. Migration from Http to Https is quite faster because Google can map it faster.

Some at G say it can take up to 2 wks for rankings to recover after rebrand to new url. @methode says it could be 3 mths if big site. #SMX