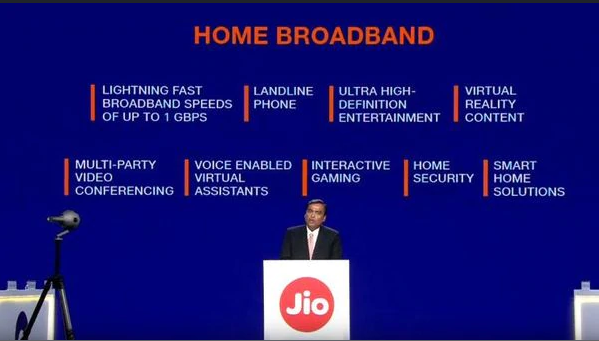 JioFiber(Jio Giga Fiber) is ready to available across the globe from Tomorrow, Thursday, September 5. Reliance Jio officially launched the JioFiber broadband service at its AGM earlier this month. Since last year’s AGM, the company-bring a GigaFiber preview offer in selected cities in India along with a deposit of Rs 2,500. It is now being heard that the customers who availed the preview offer do not need to pay anything for Jio Fiber service for two months from its launch-September 5. According to the TOI report, Reliance Jio will offer JioFiber services for free for two months to customers who subscribed to the JioFiber preview offer. This will come into existence after the commercial launch of JioFiber. Moreover, customers will be able to take the refund amount of Rs 2,500 that was paid for a security deposit at any time.

The plans will costs from Rs 700 to 10,000K per month. The plans will include free voice calls and best data speed. The company also introduces a welcome plan where customers who opt for annual jio forever plans will receive a free HD or 4K TV along with 4K Set Top Box.

Whats all On Launch? Still a Mystery!

The company announces their prices of the plans in coming days and till then we can only make a wild guess about it, and in upcoming days we do have a clear picture of the various rumors