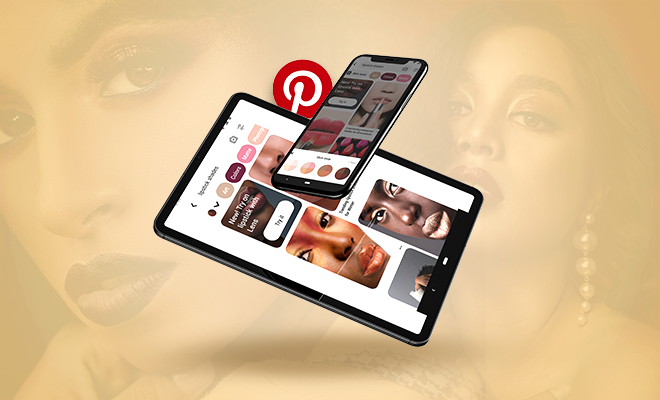 Pinterest has decided to increase the availability of its skin tone matching option to more regions as it helps to enhance the usage of its product recommendation Tool.

Skin tone ranges (our inclusive beauty results search feature) is now available beyond the U.S.- in the UK, Canada, Ireland, Australia, and New Zealand – and the design has been refreshed to surface options right from search results.

The quality of the technology has also improved, and the number of beauty and fashion Pins where a skin tone can be identified has quadrupled. Our skin tone signal is now 3x as likely to detect multiple skin tone ranges in top search results, compared to previous technology.

Pinterest has first introduced its skin tone feature last year in January in the US. The company introduces this option after having a report that near about 60% of the top 100 search items for skin include skin tone.
To take advantage of that Pinterest has now expanded this feature to more regions. This feature boosts the Pinterest effort to maximize inclusion and to make sure that every user has options according to their needs.

Inspiration begins with inclusion. And improving beauty experiences like skin tone ranges is one step towards that. Now you can see yourself in search results—ones that look and feel like you. 📌Find looks based on your choice of skin tone: https://t.co/Eatwgx3QAO pic.twitter.com/it8143vrFO

Pinterest has collaborated with more brands to take a part in its new feature and hence enlarges its AR Try-on program on the platform.

Similarly like skin tone feature, AR Try-on the program was also launched last year in January. earlier it was only with selected partners but now they are trying to reaching out to more brands for collaborations. Pinterest is putting efforts in order to expand because of the highly positive response on the initial basis.

As of today, the virtual lipstick Try on experience is living with more than 10,000 shoppable shades discoverable across 48 million beauty Pins, with products from brands including newly added NARS, Cle de Peau, and Thrive Causemetics.

The easier it is to try on, the more people are likely to buy, as Pinners come to Pinterest early in their shopping journey. Since augmented reality technology launched in January, Pinners try on an average of six lipstick shades and are 5x more likely to show purchase intent on Try on-enabled Pins than standard Pins.

In July month, Pinterest has reported 416 million active users on a monthly basis. It is approximately a 39% increase every year. According to Pinterest, these users are coming for the purpose of shopping, hence they are trying got to provide the best tools which make it easier for them to shop from the platform.

With the situation going, these updates are worth and allow the platform to even grow more.