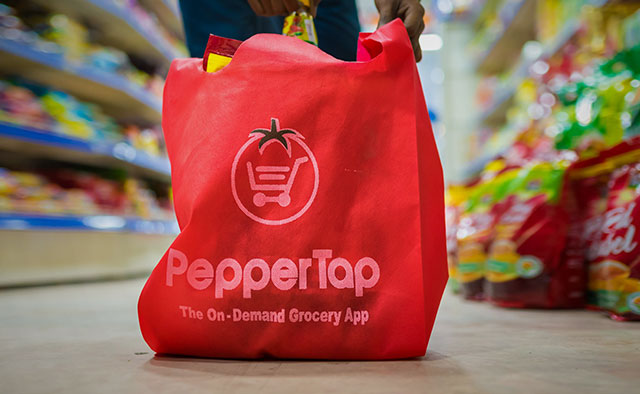 Peppertap Shut Down, Hyper local Delivery Startup, What you Learned?

From April, 2016, PepperTap, Hyperlocal delivery startup, has stopped its grocery delivery services. Its co-founder Navneet Singh stated that he shut his business and is moving their concern towards e-commerce logistics business.

According to a report, unviable economy and scarcity in demands engender the closure of the startup with sacking of its employees that was around 200 in numbers.

PepperTap was designed for online delivery of groceries from local stores to nearby customers with time limitation of two hours. This 17 month old start-up was found by Navneet Singh, graduate from Indian Institute of Ahmadabad and his former colleague Milind Sharma.
PepperTap had shown a remarkable growth in its foremost year of inception and soon it had enhanced its business to other 17 cities of India and it had recorded an average delivery of 20000 orders per day. The inventory less logic implementation helped the start-up to start with small initial funding.

Navneet said while enlightening about the main reason that, “Fast forward one year, our diverse team of highly intelligent and ambitious individuals was racking up the orders in 17 cities all over the country – by October 2015, PepperTap was one of the top 3 grocery delivery services in India with an average of 20,000 orders delivered daily. We were the only business in town to be operating on a 100% inventory-less model.

Customers seemed to be loving it – the app was easy to use and we had great introductory discounts and sales. Local stores that were live on our platform were thrilled – we were improving their sales by an average of 30-40%. With our mobile-first approach, geographic expansion was fairly easy – we could go wherever the smartphone went”.

He added that, “The last year and a half have been nothing short of a thrilling rollercoaster ride, with ups and downs in equal measure for us at PepperTap”.

In 2015, company had to roll up its services from Agra as well as Meerut and till February 2016, it had shut down its operation in six cities that include Chandigarh, Ahmedabad, Jaipur, Chennai, Kolkata, and Mumbai.

Earlier similar business, Townrush and Localbanya closed their operations after failing to raise risk funds and build stable business. Big names like Flipkart and Paytm came up with their own on demand grocery delivery vertical but they too closed their operation soon. Sources revealed that PepperTap was getting very less orders during the last month and had to let go of around 200 of its employees. Navneet avoided any comments on this.

PepperTap had successfully raised funds in the initial four rounds of funding. Other than the initial $1 million seed fund, SAIF Partners and Sequoia Capital had invested $10 million in series A funding. It had also raised $36 million in September 2015 from Snapdeal and $4 million in December of the same year. PepperTap acquired struggling Jiffstore, a hyperfocal marketplace.

Navneet Said that “Shutting down PepperTap is extremely difficult call for us but it’s the need of hour. Our foray into full stack logistics space is a well-pondered decision and our experience in consumer as well as business-focused logistics will certainly help us to build next generation e-commerce logistics startup”.

Company was already involved in a reverse logistics arms via Nuvex Logistics Pvt Ltd, parent company of PepperTap. Customers of this losgistics company were mostly e-commerce companies and it was competing with EcomExpress, Delhivery, and other logistics firms. CEO of PepperTap said, “We are pulling plug from B2C grocery business and pivoting to a full stack e-commerce logistics company”.

Reason behind shredding of PepperTap

Reasons are estimated on the basis of its operational mode that there were to be three main reasons behind the closing of the company: Hasty expansion, unfeasible discount, and weak technology.

Though this company was counted as under top 3 grocery delivery services, even then there must have been some flaws that led towards it’s collapse. The overall primary reasons that emerged through conclusion and statement of founders and other representatives are described below:

The app was not in sync with partner stores which made it not so user friendly. User faced problems like unable to see certain items on the app and unable to select the available items. Smaller stores linked with PepperTap still used manual methods and had to be taught to go digital with their approach. For larger stores, PepperTap had to frequently take data generated from their end and update it into their servers to give the users the latest update and offers.

PepperTap came up with great discounts and sales to attract users to their platform. A world where app is synonymous to heavy discounts as compared to physical store, PepperTap also provided insane discounts initially. They were backed by their investors. The plan was to build a loyal customer base through their service and then cash on them in the long run after they had build a name for themselves.

The two hour delivery was helping PepperTap to build a name, but it meant having a lot of buffer staff to fulfill this commitment. This was applicable for all the 17 cities they were operating in. With additional discounts, per order cost was increasing everyday without any scope for it to end. They reviewed their services and came up with a more technical approach to strengthen their brand name.

PepperTap can be seen as a very good example for all newly setup start-ups. It should be a learning curve that lack of proper planning can lead to the downfall of any start-up irrespective of how successful it initially was. Long term goals should always be made keeping in mind the short term goals. It is also a great example of how lack of proper knowledge and poor implementation in a particular field can cause downfall of your business. So, if you are an owner of a start-up, it is high time for you to prepare yourself against hasty practices and refrain from any unrealistic short term goals. A successful start-up is marked by patience. Every start-up needs a good customer base to flourish. So, a good amount of time should be invested in locating the proper customer base before expansion.