WHAT IS NEW THIS WEEK

LinkedIn comes up with Matched Audiences:

LinkedIn has introduced a new feature called Matched Audiences. This feature helps you to merge LinkedIn’s data with the people you already know. This features aids in retargeting website visitors, put ads to your contacts and marketing platform, and reach out to decision makers of the company. Website retargeting allows you to market your business to your LinkedIn contacts, you can also engage prospective clients from your list of contacts with the Contact Targeting option and reach to higher authorities with the Account Targeting feature who are capable of making decisions on behalf of the company.

Facebook has come up with a new option in Rights Manager which allows content owners to earn from their video that has been used by other users somewhere else. This option would reward the rightful owner instead of the person who uploaded the video somewhere else.

Content owners are also provided with another option apart from earning revenue. They have the option of setting up rules for their videos from not being viewed from infringed upload source. They can also set similar videos to be viewed and access the viewing matrices. Similarly they can put forward a request to Facebook to manually review the content. This option would be available globally in near future.

Facebook’s Messenger Lite to be Accessible in More Countries.

As a part of expanding their newly built messenger, Facebook has rolled out this new features in more countries. Germany, Italy, Colombia, Vietnam, Morocco, Algeria, Nigeria, Turkey, Peru, Japan, Netherlands and Taiwan are in the list of the countries where this feature has been implemented. The new version is compatible with older version of phones and works perfectly fine in areas with limited or non-regular internet speed as compared to the old version. 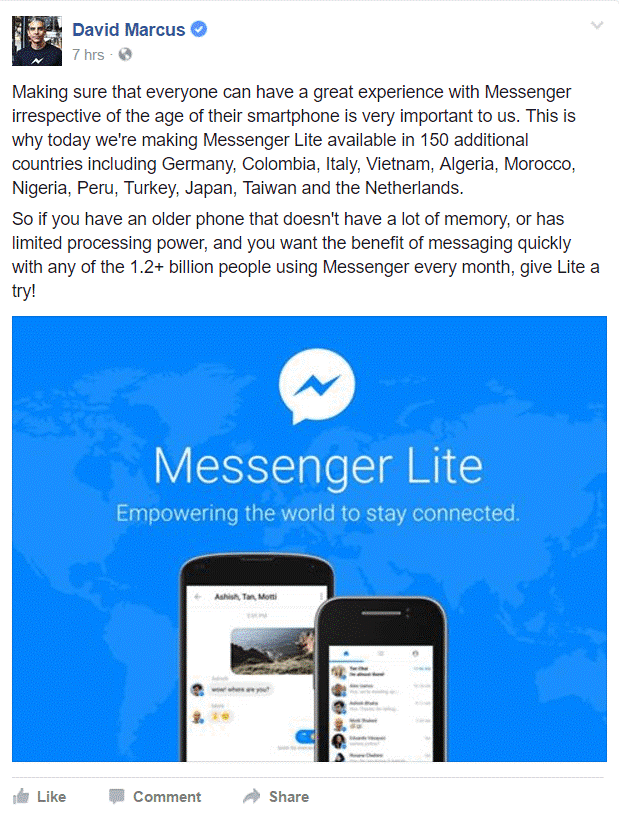 In an official statement on its blog, Pinterest announced that it will remove the Like button in the coming few weeks. The decision was made after a research which found out that users were confusing the Like button with the Save button and felt that it would be more user friendly without it.
It is being speculated that Pinterest is trying to distinguish itself from other social media platforms (Facebook and Instagram) where Like button is more prominent. This is a minor update and would establish it as a separate visual tool.

Snapchat in an attempt to be more user friendly has come up with an option that allows brands to buy customized geofilter ads from other creative firms and ad-tech partners. According to Adweek, ad partners from various nations like U.K., U.S.A, Canada and Australia are offering geofilters to other brands. They are also pitching full-screen and vertical video ads that runs parallely with stories.

Earlier geofilters were only provided by company owned Buy tool. With this new update being implemented, vendors can now assist brands with high values ad packages which would automatically manage geofilters to run at a particular geography at a particular time.

According to Marketing Land, this update is similar to the one Facebook rolled out previous year that targeted a specific industry (hotel inventory). With this added feature, online marketers can now target potential clients on a larger platform with offers and informations related to schedule or booking links.

Pinterest Comes Up With A New Update for Chrome Extension

Pinterest has announced an update for its Chrome browser that would ease the process of saving interesting contents that people find on website. This new extension uses a technology “instant image feature detection” to highlight interesting contents in the current window of the browser. It will allow fast browsing and quickly display results when browsing with Google Chrome browser.

Instagram announced that their online community has crossed the 700 million mark across the globe. The last 100 million users which joined the platform is the fastest ever in the company’s history which depicts the accelerated growth and increasing popularity of the company. According to TechCrunch, it took Instagram six months to reach from 500 million to 600 million. Various factors combined are responsible for the rapid growth on the platform. Some of which are stories features, web signup and easier joining process on low end phones.

LinkedIn user list touched the half billion mark globally that includes 200 countries. On this occasion LinkedIn shared the list of top 5 across various platforms that included industries, jobs and countries along with the average number contacts, opportunities and companies that are most connected.

LinkedIn also announced about the new update in the My Network option that would serve you with personalized data about the most connected contacts and how each one of them can assist you with your future aspirations.

Announcing it’s first quarter results for the year, Twitter shared that 9 million new users joined the platform on a monthly basis in the first quarter. With over 800 hours of live   premium video content, it had 45 million unique viewers. Despite such great figures, Twitter recorded a decline in overall revenue with its advertising revenue on a downfall for the straight second time. Twitter’s live video feature is it’s only source of  largest revenue generation.

DoubleClick Bid Manager platform of Google in U.S. has included traditional T.V inventory. This would enable advertisers to better handle their video advertisements across digital and linear TV in a single platform.

Twitch has come up with a new affiliate program that would be helpful for streamers who have put in great efforts but still were not able to reach Partner status. This would enable qualified streamers to start making money from their channels and would also give them access to new tools in new future. To be eligible for such benefits, they should have had a minimum of 500 minutes of broadcast in the last month which should include 7 unique broadcast, 3 concurrent viewers with a combined follower strength of 50 or more. The company sent out first round of invitation to qualified streamers and would keep sending the same to the people who become eligible.

YouTube Kids App which was earlier only available on the mobile will now be available on Smart TV in the 26 countries where the app is currently in function. The access to this app will solely depend on individual TV manufacturer. After several cases against YouTube and YouTube Kids which blamed the company for marketing to minors, YouTube has come up with the option of ad-free subscription which removes paid ads from being played.

Twitter is planning to broadcast live video throughout the day on its app and desktop site following on the 800+ hours of videos that they played during the first quarter of this year. Twitter plans to establish itself as a pioneer in the field of video playback. Though no specific timeline has been proposed for reaching this landmark, Twitter informed that they are currently occupied with many things and this has pipelined many concepts.

Twitter is pitching advertisers to loosen their pockets to reach out to a larger audience at its inaugural NewFronts event.

Facebook is currently engaged in testing the ability to upload the feature of videos as cover image for pages on its website. Facebook has always been on the forefront when it comes to new features that enhance user experience. Though Facebook is still silent and did not share any details regarding the feature.

Facebook is testing the Related Articles feature in its news feed. This feature will come up with related news items on top of news feed column that would provide additional information related to the article that would be verified by third party checkers. Facebook had initially added this feature for its news feed in 2013 that showed people similar articles to the ones they recently read.

According to Facebook, this update will not have a significant change in the reach to audience and advised page owners to continue with the posts that are relevant to their targeted audience.

Facebook in an announcement mentioned that from May 20 Facebook Pixel will start monitoring more information and event data that would include metadata from websites. This update would improve ad delivery and reporting. For pixels that were created before 20th April, this feature would come into effect from May 20 and for others it will be in effect immediately.